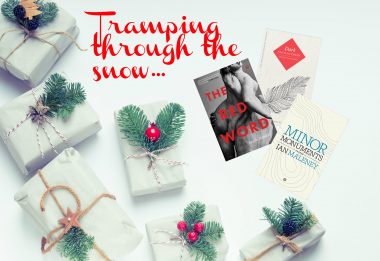 Christmas shopping? We’ve got that thing you’re looking for.

LIMITED TIME OFFER: order any book from our website on the 17th-19th December and we’ll add a FREE GIFT!

Order by the 19th of December to receive before Christmas.
All orders placed before 3PM will be posted out that day.

Set around a small family farm on the edge of a bog, a few miles from the river Shannon, Minor Monuments is a collection of essays unfolding from the landscape of the Irish midlands. Taking in the physical and philosophical power of sound and music, and the effects of Alzheimer’s disease on a family, Ian Maleney questions the nature of home, memory, and the complex nature of belonging.

A thought-provoking and quietly devastating meditation on family and loss. With echoes of Tim Robinson, Tara Westover and John Berger, Minor Monuments is a beautiful and unique literary experience.

Chosen by Colm Toibin as one of his books of the year.
Shortlisted for Irish Book Awards Non-Fiction Book of the Year
‘Minor Monuments is a beautiful, touching and extraordinarily intelligent book. I loved every page.’ – Sally Rooney
‘Beautifully poised between the vivid recollection of experience and subtle reflections on the nature of memory itself.’ – Fintan o’Toole
‘This is an extremely fine debut.’ – Kevin Barry
‘This is the kind of book that changes its reader.’ – Lisa McInerney
‘What an exquisite and carefully wrought book’ – Max Porter

The Red Word by Sarah Henstra

“The Red Word echoes Donna Tartt’s The Secret History — another Greek myth-soaked, Ivy League campus-set novel in which a tutor inspires cult-like devotion in their students — but there is nothing derivative about Henstra’s tale. The Red Word is a beautifully written, gripping take on the battle between the sexes.” Financial Times
“Compulsive & perfectly formed.” New Statesman / “A timely treatise.” Irish Times / ‘I haven’t been able to stop thinking about The Red Word since I devoured it in one sitting.’ – Louise O’Neill / ‘Henstra draws on Greek mythology to comment on contemporary issues” New Yorker / ‘Will get you fuming, laughing, cheering, and most of all, thinking.’ Cosmopolitan / “Timely and incisive.”- Harper’s Bazaar

Exhausted after years of unhappiness, 20-year-old Juliet Cunningham is delighted to find herself living in a village in the French Alps. Recovering in the fresh air of the mountains, she becomes involved in local life. As Juliet makes new friends and meets fellow wanderers – such as the handsome young Michael – she hears of stories of witchery, of fortunes told, of spells, and murder … but are the rumours of the witch true, and can Juliet escape in time?

First published in 1953, Dark Enchantment evokes a magical pre-war France, and was written after Macardle’s other successful and influential novels The Uninvited and The Unforeseen.

Praise for Dorothy Macardle:
‘A vanished enchantment … perfect escape literature’ – The New York Times / ‘Casts its own spell’ – Kirkus Reviews / ‘One of the most entertaining Irish novels I’ve read all year.’ – The Irish Times
‘Terrific. A gripping ghost story that warns precisely about the silencing act of history and the dangerous process of transforming women into symbols.’ – Dublin Inquirer

Browse our shop for more.