Vertigo is the sense that if I fall I will fall not toward the earth but into space. I sense no anchorage. I will pitch forward, outward and upward.

A collection of stories that are at once otherworldly and familiar, funny and biting, Vertigo invites the reader into a series of episodes: a snapshot in a restaurant overlooking the sea where a woman contemplates her husband’s infidelities; a family holiday, a hospital visit; the discovery of online affairs. Breathtakingly original, Vertigo is an intense and fractured composition about the uncanny everyday.

‘Her prose has the precise, observant quality of a master tweeter, with none of the frivolity that might imply … The book is designed to induce vertigo … The stories are delicate, but they leave a strong impression, a lasting sense of detachment colliding with feeling, a heady destabilization.’ Los Angeles Times

‘The interplay between meticulousness and uncertainty in Joanna Walsh’s writing turns the world on its head with such poignancy and lightness of touch one feels one is gazing at a snow- globe out of season. Mesmerising and unsettling, it is a book that treats its reader uncommonly well.’ Claire-Louise Bennett

‘This book is about how embarrassing it is to be alive, how each of us is continually barred from our self … Vertigo is a writer’s coup.’ The Rumpus

‘Her writing sways between the tense and the absurd, as if it’s hovering between this world and another … Walsh’s Vertigo may similarly redistribute the possibilities of contemporary fiction, especially if it meets with the wider audience her work demands.’ Flavorwire

‘With wry humor and profound sensitivity, Walsh takes what is mundane and transforms it into something otherworldly with sentences that can make your heart stop. A feat of language.’ Kirkus Reviews 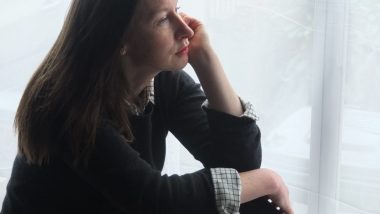 Joanna Walsh is a British writer and illustrator. Her writing has appeared in Granta, The Stinging Fly, gorse and has been anthologised in Dalkey Archive Press’s Best European Fiction 2015, Best British Short Stories 2014 and 2015, and elsewhere. A collection, Fractals, was published in the UK in 2013, and her memoir Hotel was published internationally in 2015. She writes literary and cultural criticism for The Guardian, New Statesman, and The National, is the fiction editor at 3:am Magazine, and created and runs the Twitter hashtag #readwomen, heralded by The New York Times as ‘a rallying cry for equal treatment for women writers.’ Visit her website here.