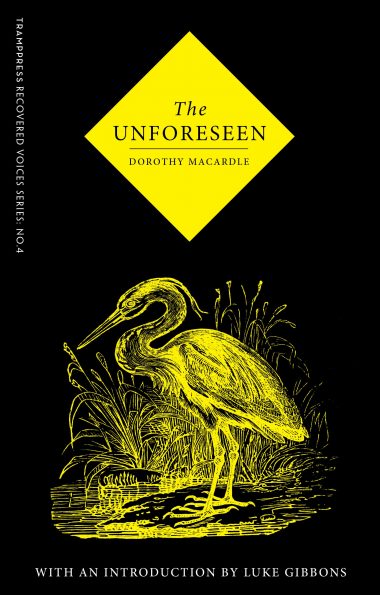 Coming next: The Unforeseen by Dorothy Macardle

Join us on November 4th to launch the latest spooky edition to our Recovered Voices series. The Unforeseen by Dorothy Macardle will be launched as part of the Dublin Book Festival in the Gutter Bookshop at 6.30pm, with a reading by special guest Elske Rahill.

In 1938, Virgilia Wilde, an Irish writer, leaves England to begin a new life in the tranquil setting of Wicklow with her daughter Nan. As strange visions threaten those around her, Virgilia must decide if she can intervene and prevent tragedies to come, or if her worst fears must play out as she helplessly looks on…

This follow-up to the critically acclaimed haunted-house novel The Uninvited is a sharply observed account of pre-World War II Dublin, as well as a darkly prophetic forecast of things to come. The Unforeseen reaffirms Macardle as Ireland’s answer to Shirley Jackson.

The launch is free and all are welcome, and there will be wine!

Praise for The Uninvited

‘One of the most entertaining Irish novels I’ve read all year.’
– The Irish Times

‘Terrific. A gripping ghost story that warns precisely about the silencing act of history and the dangerous process of transforming women into symbols.’ – Dublin Inquirer

DOROTHY MACARDLE (1889-1958), an Irish novelist, playwright, journalist and historian, was born in Dundalk in 1889 to a wealthy brewing family, and educated at Alexandra College and University College, Dublin. A Republican and member of Cumann na mBan, Macardle was imprisoned for her activities during the Irish Civil War, and later worked as a journalist with The Irish Press. Her monumental history, The Irish Republic, was published in 1937, and her account of the plight of children in war-torn Europe, Children of Europe, in 1949. Her plays were produced at the Abbey and Gate theatres, and among her works of fiction are Earth-Bound: Nine Stories of Ireland (1924), Uneasy Freehold/The Uninvited (1942, and republished by Tramp Press in 2015), and Fantastic Summer/The Unforeseen (1946). She died in Drogheda in 1958.