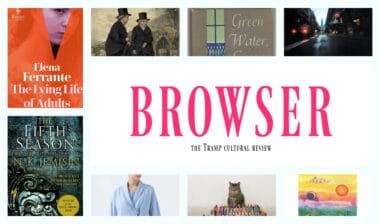 Laura Waddell [LW]: Quick and witty: The Quick Brown Fox Jumps Over the Lazy Dog, Across Genres. “She is thirty-one years old.”

For a longer read, Mina Tavakoli in Pitchfork on vaguely titled 90s compilation album Pure Moods, which I knew nothing about going in. It’s such an oddity, very of its time, characterised by “mesmeric alternate realities, sentimental chintz, and a strangely narcotized, palliative hopefulness.”

And Miles Klee in MEL Magazine on why Trump lipsyncher Sarah Cooper resonates more with Boomers than Millenials and Gen X/Y.

In fun and games, LookingAtSomething.com is a simple interactive website by Rafael Rozendaal, in which you can control a rainstorm by moving your cursor.

Someone made a covid mask catapult.

And you know Rube Goldberg machines, the complex set ups where ball bearings run through a course and so on? Here’s one of the best, featuring dinnertime, cats and dominos.

First, here is a gorgeous 1973 promotional film from the University of Stirling, which shows off its leafy autumnal campus and modern architecture, and featuring the poet Norman McCaig. It’s difficult to imagine something with such earnest beauty and gravitas being made now.

C’était Un Rendez-Vous by the charismatically named Claude Lelouch is an enthralling 7 minute film from 1976 showing a car bumper view of a high speed drive around Paris at half past five one Sunday morning, at one point taking to the pavement to avoid a bin lorry, and sending pigeons scattering.

On a different note, The House That 2 Built: the Nineties and Noughties is a great BBC 2 doc from a few years ago showing how the cultural zeitgeist was captured and driven by the boom of DIY reality shows, such as Changing Rooms.

SDG: I’m on a roll for great reading just lately, I love it when that happens. I’ve been absolutely bet into NK Jemisin‘s The Fifth Season – just one of the best and most interesting books I’ve read this year. ‘Sometimes it seems, if I can just think differently … if I can shed enough of what they taught me and try something new … I might  –’ This is Alabaster, the greatest character, trying to figure out new ways to use his innate power, but worrying that the very restrictive society he’s survived since he was a child has rendered that hope impossible. NK Jemisin talks about bigotry so powerfully and yet so subtly, it’s for me a fantasy book that does everything great fantasy should do. Here’s a review that does it justice.

I also treated myself to the audiobook version of Anne Enright‘s Actress. Anne reads it herself and it’s so dry and funny and GOOD, it’s a great way to inhabit the book if you haven’t had a chance to pick it up yet. I’m just running around listening to it and cackling.

Just you can never hear enough about the great new books you love. The genius of the women we’re surrounded by is so awing. Why is not everyone just going around expressing more love and awe, is my question.

LW: I’ve been lucky enough to have a proof of Elena Ferrante‘s new novel, The Lying Life of Adults, for ages – but I’ve only just picked it up. I hesitated because she’s one of my favourite living writers – really top tier stuff for me – and balancing the excitement of a new book with the fear of not loving it had put me off til now. But fortunately, I’m absorbed in it. It follows a young teenage girl, Giovanna, who is drawn to her estranged and “vulgar” aunt Vittoria, much to her parents’ displeasure. It has some Ferrante hallmarks: working class Naples, girls navigating complex friendships and the power they hold within romances, with always life’s shadows lurking. I love it.

For #APSTogether, I’m slowly reading Green Water, Green Sky, my first Mavis Gallant. I’ve just started. The fast chapter details a young man’s recollection of a day spent in Venice babysat by aunt and cousin. It was full of detail and rich phrasing. Within a page I knew I’d read more of her work. Elliott Holt described it as “prose with a high thread count.”

SDG: Carrying on from our nightgown conversations; bedjackets anyone?

I am over-absorbed in what I’m going to where while I’m in a maternity hospital sometime around November, presumably as a distraction from what’ll be happening to my vag while I’m in there. Anyway these bedjackets are stunning. (In the end I got a fleece from M&S instead. I bought it in white which seems just daring enough.)

LW: I don’t know anything about classical music, but stumbled upon this podcast called Relevant Tones. I really enjoyed the episode on Bach’s Goldberg Variations, particularly for introducing me to the weird and wonderful piece by Uri Caine which has low level muttering throughout. He has a whole album taking Bach into unexpected genres, and it’s so fun.

Also in ‘late to podcasts,’ I’ve just discovered After the Tone, which plays messages people phone in to the answer machine with. Very random chat.

SDG:  I got to see my parents last weekend which was so lovely, having missed them for the last four or five months (like so many people). We were chatting about god knows what and my father mentioned the Ladies of Llangollen.

Two women living in 1780s Irish society, in Kilkenny, were for different reasons condemned by the patriarchy: in Eleanor Butler’s case, to be imprisoned in a French nunnery for the crime of reaching the age of 39 without marrying, and in Sarah Ponsonby’s, for catching the eye of her already-married benefactor. They risked it all to try and run away together, and on their second attempt in 1778, disguised as men (and the maidservant too!) they succeeded. Together they set up home in Llangollen in Wales, devoting their lives to each other, and to art, books and conversation. Wordsworth wrote poetry about them, and their home became something of a haven to travellers. They named a succession of their dogs ‘Sapho’, in case anyone was in any way unclear about their relationship.

You just don’t hear too often of people escaping, so I’ve gone on a bit of a deep dive about them, being familiar with some of their family’s descendents. A joy dive. Can we have a movie please? In the meantime I think our next AGM should be at the gothic ‘fantasy’ they created with their home, Plas Newydd.