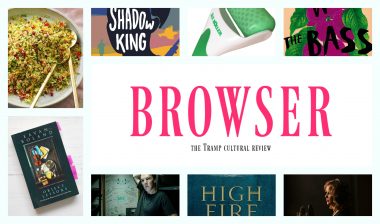 A little of what we've been enjoying in lockdown.

Here’s what’s making us tick in books, tv, online, and more – because there’s nothing like a good recommendation for finding your latest obsession. And, let’s face it, we need all the distractions we can get right now.

Laura Waddell [LW] I’m going to jump right in to suggest switching on an ambient restaurant/bar track to set the scene. I’m listening to this one right now. I saw a cafe scene on tv recently and it made me think of the everyday sounds we’re missing that make our own headspaces feel less echo-ey.

In articles, this New York Times piece is a deliciously nosy look at the bookshelves of celebs like Cate Blanchett. If you can stomach coronavirus content, this New Yorker photo essay documents a day in the city under pressure in quite a spectacular way. I’ve also enjoyed Eater London’s recommendations for food themed tv/films, as in this article by Sejal Sukhadwala.

Lisa Coen [LC]: My husband gave me a knitting kit for Christmas. I hated knitting in school, but in the last few years I’ve been admiring my mother’s skills and wanting to give it a go. I think working on Sara Baume’s handiwork finally gave me that push and I’ve been really enjoying it. It turns out it’s much easier with adult-size hands. With the covid crisis causing a resurgence in handicrafting, fibre arts, etc, I’m seeing lots of interesting articles about knitting, including this one by Alann Okun: ‘The best $42 I ever spent: A single ball of yarn.’

Sarah Davis Goff [SDG]: I think a lot of us are struggling with having to watch three men with no real mandate lead the next Irish government. I found this Tribune article by John Reynolds really insightful.

SDG: I watched the last episode of Homeland during the week and found it satisfying and moving. Over 8 seasons the show has had some ups and downs, but I have nothing but love for the Carrie Mathison character (played of course by the brilliant Clare Danes and her wobbling chin) and the bond she and boss Saul Berenson (Mandy Patinkin!) share. If you enjoy work about complex, flawed women being shit-hot at their jobs it might be for you! Here’s a very wholesome clip of Mandy Patinkin losing his shit.

For something completely different, I’ve been comfort-rewatching Santa Clarita Diet over on Netflix. If you’re in the mood for something sunny and funny with kind of comedic gore take a look! Timothy Olyphant and Drew Barrymore are having a lot of fun in it.

LC: We just watched Brexit with Benedict Cumberbatch as Dominic Cummings. It’s interesting and timely, but also too soon, I reckon, for the story to be fully told. There’s a very good speech by Rory Kinnear’s character about how the Leave campaign had had a twenty-year headstart on the Remainers.

LW: I got a sneak peek of new Netflix drama The Eddy, out 8th May. It’s set in the present day around a troubled jazz club in Paris, mostly filmed in the Belleville area, where Edith Piaf was from. It’s so gorgeously shot. I kind of felt like I was walking around with them, getting all sticky in the grit and warmth of the city. Impressively, the jazz band are real musicians (mostly new to acting) and the music is all original. There’s also a murder plot, but it’s a real slow burner. Here’s a good overview of it.

I’ve also been watching vintage slice of life docs on BBC iplayer, like Heart of the Angel (1989), about workers of the London tube station before its modernisation, some of whom had to crawl into the tunnels to clean them (!), and A House in Bayswater (1960), which is straight from a Muriel Spark novel with its eccentric landlady and tenants.

LC: I picked up my copy of Object Lessons by Eavan Boland last week, after hearing about her death. It’s enraging and energising to read about how she set about claiming a space for herself in one of the most suffocatingly misogynist disciplines ever – Irish poetry.

handiwork has sent me back to the The Usborne Nature Trail Omnibus. I’ve been trying to identify birds and trees for my son when we go on our afternoon walks.

I’m listening to the new Stephen King book If It Bleeds in short bursts throughout the week. I’m not very far in, but the first story is a lot of fun: Monkey Paw meets Christmas Carol by way of Thoreau and ends up in a big empty house in Maine.

SDG: Reading: I was very excited to see and then steal my husband’s copy of Highfire, Eoin Colfer’s first work of adult fantasy. Gorgeous southern gothic voices, dragons, and a great sense of humour, I’m loving it.

Listening: I’ve been savouring Maaze Mengiste’s latest novel The Shadow King, set in the 1935 Italian invasion of Ethiopia with a particular interest in the female soldiers who went to battle.

LW: I’ve been following #TolstoyTogether, a read-along guided by the author Yiyun Li, which tackles War and Peace a few chapters at a time. I usually read it just before I go to bed, when it’s dark and all is quiet, and now we’re past the half way point I’m starting to realise how much I’ll miss it when it’s gone. I wrote about the experience here. And of course, Sara Baume’s handiwork comes to mind a lot these days; particularly thinking about daily routine and artistic practise. I’m not feeling particularly productive at the moment, but I’ve been valuing the new habits adopted in recent weeks.

Other than that, I’ve just started The Bass Rock by Evie Wyld, which I’ve been looking forward to, and before that finished Frantumaglia by Elena Ferrante. I love how she completely resists the media’s demands for celebrity and ego and refocuses attention back to her books. There’s even a question from an interviewer where she’s asked what she feels about a particularly prestigious literary prize. Her reply: ‘nothing.’

SDG: I’m addicted to this tabbouleh recipe from Nadiya Hussain. I make it at least once a week, throwing in a can of chickpeas and eating it with hot sauce (I do feel like if I was in a restaurant behaving that way I’d probably get thrown out).

LW: All I have to say is The Ice Roller. Google it. Forget prissy little jade rollers, this thing is what you need. I like its clunky utilitarianism. I don’t use it for beauty purposes, it just feels good.

LC: When this lockdown is over, I am never cooking again.

LC: I’m always listening to the Creep Dive podcast by Tall Tales, and the hilarious Mother of Pod, by the same team. It’s the best thing on parenting I have ever encountered, and I read at least a dozen books on the subject in a vain attempt to get a grip on it.

LW: I want to give a shout out to Extra Teeth, a new literary mag from Heather Parry and Jules Danskin. The first issue contained Janice Galloway, Leila Aboulela and Lisa Mcinerney and they’re taking pre-orders for issue two now. Print lovers will enjoy its striking design too.

SDG: Another thing I’ve been revisiting as comfort food is the brilliant Irish History Podcast. I’m stunningly ignorant about Irish history so it’s nice to be educating myself a little, but mostly I’m in it for presenter Finn Dwyer’s soothing voice.